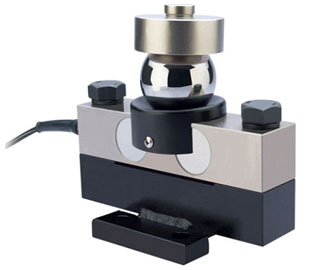 Ball and Cup Load cells surpass Its Competitors in Terms Of Resistance against Side Forces. It Is a Fact That the Major Reason behind Load cell Manufacturing Is the Horizontal Side Forces Created by the Vehicles during Brakes and Sudden Start-Ups. That Is why, Scales with Column Type Load cells require Construction Absorbing Side Forces. However, Such Construction As Rocker Supports, Tensions Rods, Buffers, Etc Need Maintenance And Have An Adverse Impact on Weighing Accuracy.

applications, the double ended shear beam offers a number of advantages over other designs. Units like the one shown opposite have built-in jacking bolts which can be used to support the weighing structure during installation thus allowing the live load cells to be fitted just prior to commissioning, avoiding damage. The load cell is designed to rock on its mounting base to accommodate misalignment in mounting surfaces whilst still being retained. The mounting arrangement also permits limited movement to allow for thermal expansion and contraction as well as lift off protection.

The above advantages make the double-ended shear beam load cells superior over the conventional compression load cells and are more popular now a days in developed countries for various fields applications. A brief explanation on the above advantages is given below and the literature provided speaks in detail about the design concept, performance and applications of double-ended shear beam load cells.

At the outset we would like to introduce ourselves as EAGLE SCALE MANUFACTURING WORKS, which started operations in SINCE 1974 Industrial Weigh Bridge, Weighing Systems, Laboratory Balance, Small Scale & Platform Scale etc.

We have ISO 9001 – 2015 certified manufacturing Unit at Ahmedabad, Gujarat, India. We are manufacturing all types of Weigh Bridges.